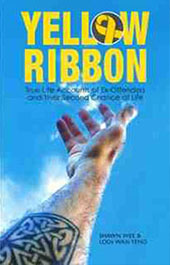 "When I first arrive, some of the fellow kitchen staff would look at me in a certain way and talk behind my back due to my background. Everyone had an opinion of me ..." Tan Kin Meng

"One of my colleagues [said that] he was skeptical about the [Yellow Ribbon Project], saying that 'A leopard cannot change its spots.These people will never change.'" Nicodemus Lee

Sypnosis:
Drug abuse, peddling, smuggling, and even murder: what happens after those convicted of these crimes are released? They have done the time and paid the price, but can they really change?

Upon release, many ex-offenders struggle with the stigma of having done time. They are released from prison or drug rehabilitation centres, only to find themselves imprisoned by something far more intimidating than steel bars, barbed wires and towering walls prejudice. Viewed with suspicion, they face difficulties in securing jobs and reconciling with their loved ones. But all they need is a chance to prove themselves.

Yellow Ribbon is a book that chronicles the lives of eleven ex offenders in Singapore who have managed to break free of the "second prison". Through their own determination, the support of those around them, and initiatives like the Yellow Ribbon Project, they have managed to overcome the odds and secure for themselves, and their families, a better, brighter future.